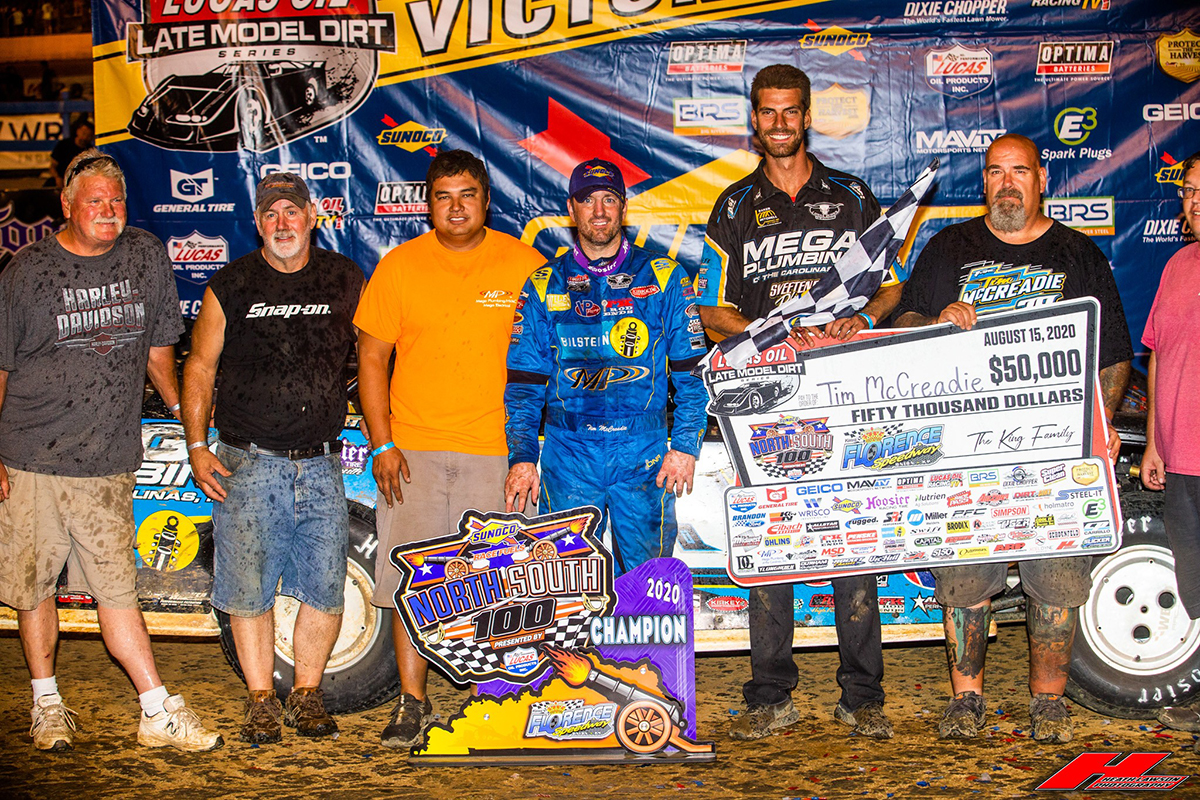 Tim McCreadie passed race leader Jimmy Owens on lap 87 and pulled away to win the 38th Annual Sunoco North-South 100 Presented by Lucas Oil on Saturday Night at Florence Speedway. McCreadie came from the 20th starting position to pick up his second career win in the crown jewel event sanctioned by the Lucas Oil Late Model Dirt Series. The 46-year-old New York native earned $50,000 for the triumph.

Brandon Overton got by Owens with just a handful of laps remaining to take home second. Owens, the current LOLMDS points leader was third. Chris Ferguson who started from the pole was fourth with Dale McDowell claiming fifth at the checkers.

Owens and Overton ran 1-2, and traded the lead for two laps, until first time Florence visitor Ricky Thornton Jr. started to use the high-side to his advantage. Thornton took second on lap 54 from Overton. By lap 60, Overton was back around Thornton. Meanwhile McCreadie, who had started on the outside of row number ten, had climbed through the field and was running third by lap 68. Owens was still out in front, but a stretch of cautions kept the field close. On the 76th lap, McCreadie cleared Overton for second and set his sights on Owens. The final caution appeared on lap 83 and that set-up McCreadie’s charge for the top spot.

McCreadie hounded Owens after the last restart as he would dive to the inside of him to take over the lead on the 87th lap. McCreadie then opened the lead over both Owens and Overton, who in the last ten laps had battled side-by-side with Overton, finally winning the tussle with Owens.

McCreadie added another big payday to his racing resume. He appeared in Lucas Oil Victory Lane for the 14th time in his career. “Every time there was a caution I was getting more and more upset. I tried to run the bottom as long as I could because the tires would get a little hot and then the car would just start to slide. The tire rule here has made the racing a lot better. Kudos to the series for doing that. There wasn’t much of a lip up top tonight like I am used to here. I could see the fans going crazy down the backstretch, it’s a lot of fun to come here and race and the fans are great.”

Overton withstood a terrific battle with Owens to take second. “Man, I really wanted those two to get up there and race a little harder with each other. I was kind of married to the same line Jimmy was. Timmy could kind of roll around the top and I was a little too soft. I was kind of playing a little defense.”

Owens was looking for this fourth win in the crown jewel event but came home in third.  “It was just caution after caution after caution and that wasn’t helping us any. We could extend the lead out a little bit and then it would get closed back up. Timmy had a great car tonight; my hat is off to him. I am happy to come out of here with a third-place finish.”

The winner’s Paylor Motorsports Team owned by Donald and Gena Bradsher has a Longhorn Chassis powered by a Cornett Racing Engine and sponsored by Mega Plumbing of the Carolinas, Bilstein Shocks, VP Fuels, Sweeteners Plus, and D&E Marine.