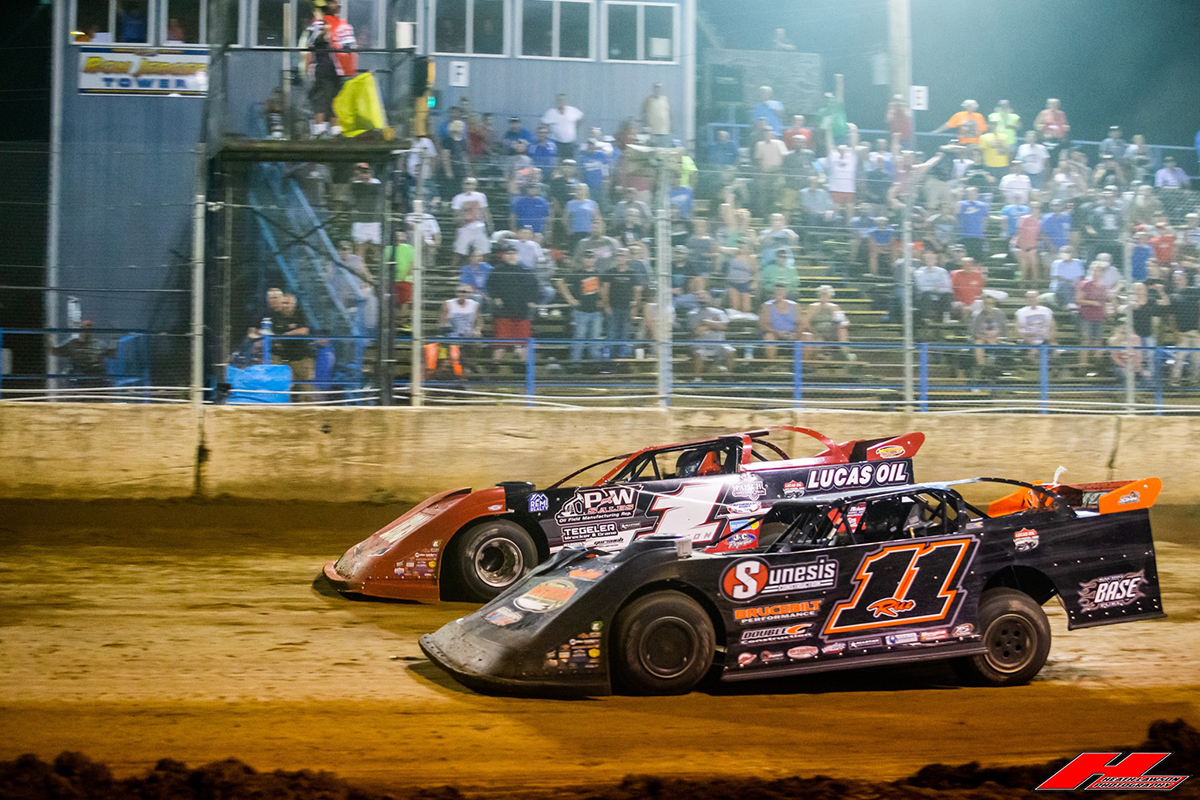 Earl Pearson, Jr. picked up his first Lucas Oil Late Model Dirt Series win since last February as he won in a photo finish over Florence Speedway track regular Josh Rice on Friday Night. The win kicks off the weekend of racing at the Northern Kentucky ½ mile oval in the General Tire Summer Sizzler Nationals presented by E3 Spark Plugs.

Pearson’s 39th career Lucas Oil Late Model Dirt Series victory came by a scant .002 seconds, which was the closest finish in series history. Pearson took the lead on the white flag as he held off Rice and Zack Dohm who nearly made it a three-wide finish. Kyle Bronson finished in fourth followed by the Optima Batteries Hard Charger of the Race, Trevor Landrum.

Jonathan Davenport grabbed the lead at the start of the 50-lap feature and held the point until series point leader Jimmy Owens passed him for the top spot on lap 18. Owens was holding off Davenport, Rice, and Bronson until lap 27.

Rice took over the point and stretched his lead over the field by over two and half seconds. Rice was primed for his first career Lucas Oil Late Model Dirt Series victory, but in the last five laps both Pearson and Dohm cut into Rice’s lead. Pearson made the winning pass with two laps to go. Rice gave it everything he had and dive-bombed Pearson at the finish line but came up short.

In Lucas Oil Victory Lane for the first time since early 2019, Pearson became the 13th different winner of the 2020 series campaign. “He [Rice] was up there on the cushion and when you are out there in the lead you don’t know where to go. We found a line through the middle of the racetrack. He [Rice] did a heck of a job and drove the wheels off that car tonight. He’s a good kid, I love racing with him. He drives everybody clean and I respect the heck out of him,” said the 4-time Series champion.

“The track was pretty well racy. I don’t know what happened to Davenport and Jimmy up there, but when it is your turn, it’s your turn. It’s been a long-time since we won here at Florence, 10 years to be exact.  We will take the win tonight and hopefully we can keep on going tomorrow.”

The 21-year-old Rice recorded his best career finish with his second-place run. I tried backing off the cushion in the last five or so laps. I know it was close finish. We had a hot rod tonight; we will be ready for tomorrow night. If we hadn’t got the front knocked off, I don’t think they would have had anything for us.”

Dohm had his best Lucas Oil Late Model Dirt Series finish of the season with his new Longhorn Chassis.  “I thought the cushion would be bigger during the race. We were set-up to run the bottom and that’s where we stayed the whole race. If that cushion would have been there we would have been in trouble. Congrats to Earl on the win, I hoped the fans enjoyed that race.”