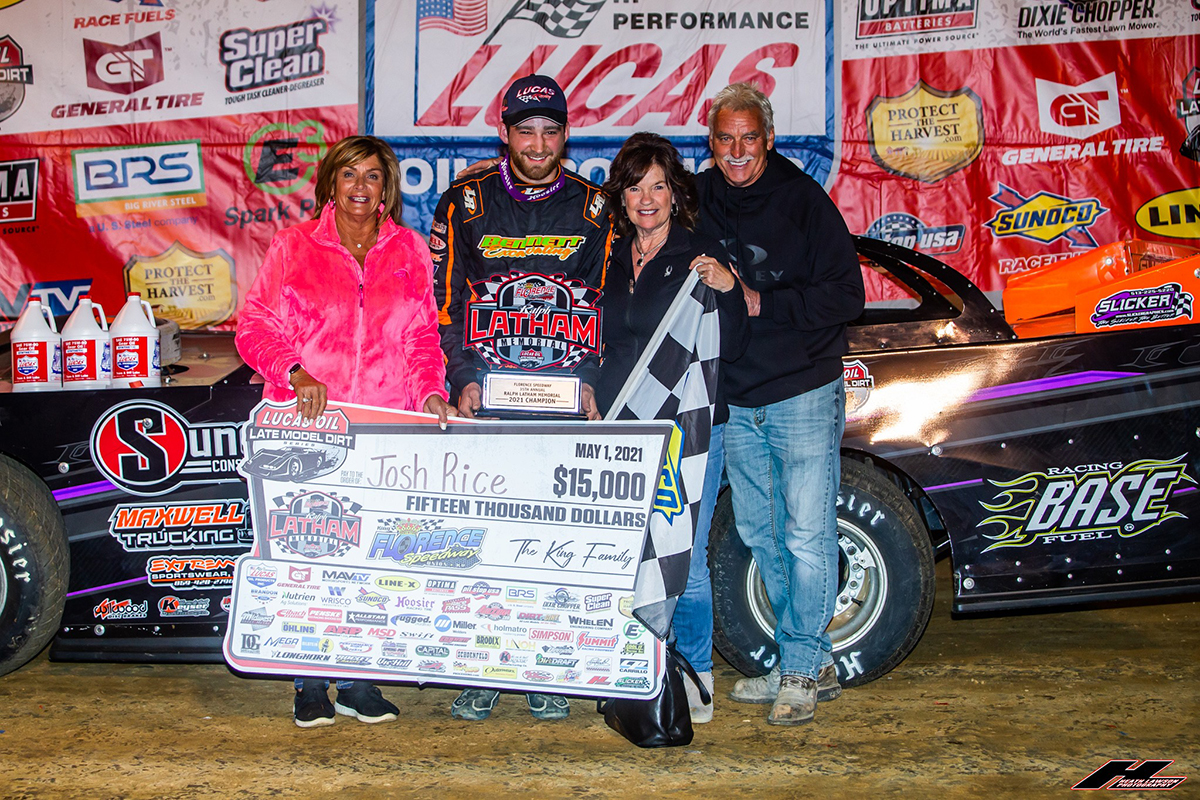 Josh Rice scored the biggest win of his racing career on Saturday Night at Florence Speedway. He won the 35th Annual Ralph Latham Memorial and earned $15,000 for the victory.

On lap 57, Rice took the lead from Hudson O’Neal and pulled away for a spectacular win in front of his home track crowd. Rice’s margin of victory was 1.212 seconds ahead of O’Neal at the finish line. The 22-year-old Kentucky racer scored his first career Lucas Oil Late Model Dirt Series win.

A caution with 32 laps complete set-up a fantastic battle between O’Neal and Rice. Time-after-time Rice threw a slide job in turns one and two to briefly take the lead, but each time O’Neal crossed over to maintain the point.

Rice was overcome with emotion in Lucas Oil Victory Lane as he became the 11th different winner on the series tour in 2021. “I can’t believe it. I thought I was never going to get by him [O’Neal]. I didn’t know if I was clearing him or not. I wanted this one so bad. I have been asked what is my most wanted win and it is this race. Dave Latham and his family have been so good to me. You race fans are awesome. I almost lost my voice screaming in the car getting over here to victory lane.”

“I had to show the backstretch some love. I never get to celebrate with the backstretch crowd. He [O’Neal] got really tight going into the corners and I knew it was my shot to get past him for good. I was trying so hard to peddle if off of two and down the backstretch. I was so much better down in three and four than anybody else. I was so thankful when we cleared him. The first 20 or so laps I tried to take it easy.”

O’Neal, the 2018 event winner, came home second to remain in the runner-up spot in the points to McCreadie. “He [Rice] was like a fly, every time you swatted him away, he would come back. That was an awesome race. I wish it would have ended a little different, but congrats to Josh. I know it’s a huge home crowd win for him. I can relate when I won the Jackson a few years ago, I had that same feeling.  We had a good race car all night long, we just came up one spot short.”

Davenport was seeking his third Latham Memorial win, but came home in third. “I couldn’t get those young guns to slow down enough to catch back up to them. Josh did a great job. He runs here a lot and he knows how to run this cushion. Our car was balanced. I thought the top was better in three and four and I never thought it would be there in one and two.”