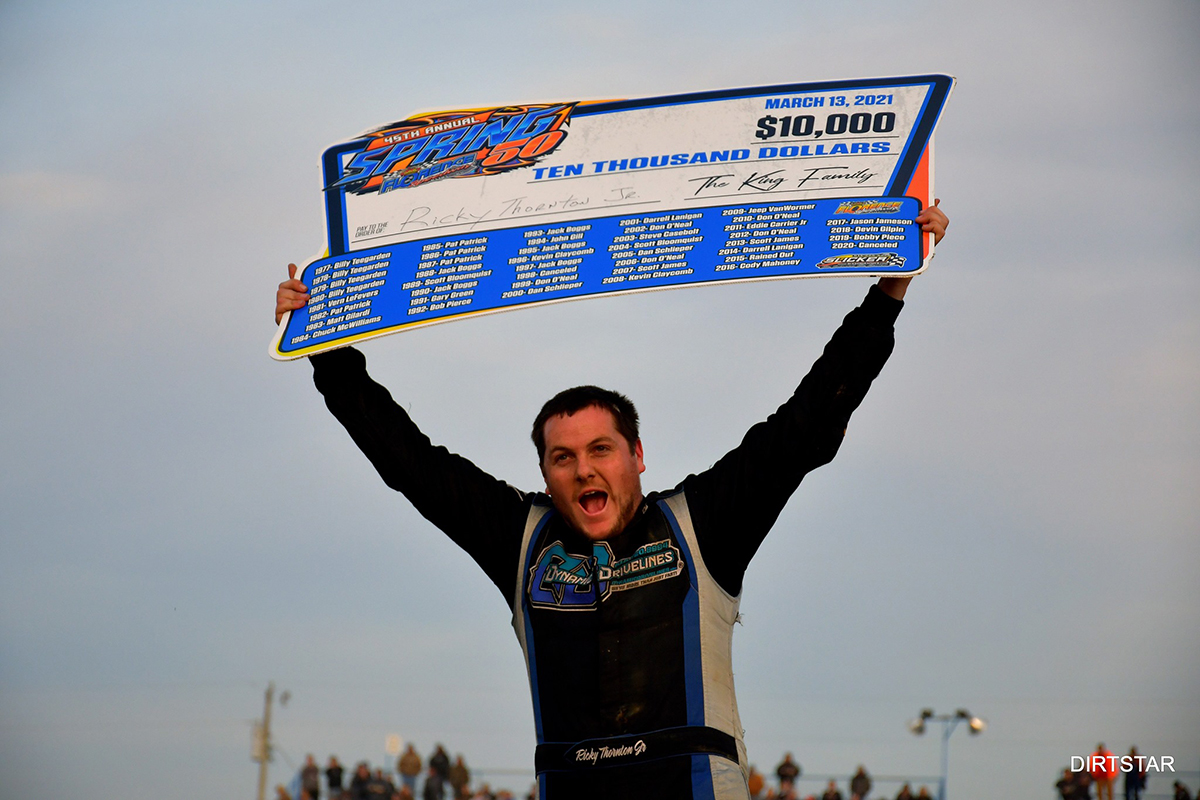 It’s never easy watching competitors race past and pull away. But that’s exactly what Ricky Thornton Jr. faced Saturday evening at Florence Speedway, despite starting on the pole for the 45th annual Spring 50.

The Chandler, Ariz., native led the first three laps, but after fellow front-row starter Jimmy Owens went around him in turn four on the fourth circuit, Thornton dropped all the way back to fifth a lap later. Teammates signaled Thornton from the infield not to worry, encouraging him to take it easy while battling rough-and-tumble conditions at the half-mile oval.

“My crew guy was yelling at me early, like, ‘Slow down, just let those guys go,’ ” Thornton said.

Thornton indeed avoided problems that knocked out contenders — second-running Josh Rice retired midrace and another local, Robby Hensley, dropped out running fifth a few laps later — and was solidly in third as the race entered the late stages.

He moved up to second and began stalking Owens when the leader’s car hit a rough patch in turn two and violently bounced, forcing the leader to try and gather his car while Thornton dove into the lead in turn three.

Thornton nipped Owens at the line on the 44th lap, then led the rest of the way for a $10,000 victory in the unsanctioned Super Late Model event that opened the season at Florence.

“Our gameplan there was just to kind of ride around the bottom as long as we could, and kind of save our stuff,” Thornton said in victory lane, adding that he did his best to find the smoothest way round the track.

“I think I was way worse if I was hitting the holes,” he added, but “overall, it really wasn’t that bad. You could still race. So that part was really nice.”

Once Owens took command on the fourth lap, he pulled to commanding leads while Erb and then Rice gave chase. Verona, Ky.’s Rice advanced from eighth to second and looked strong before pulling to the infield near halfway, allowing Owens to open up his lead again.

Thornton inherited third upon Rice’s departure and was up to second late in the race when Owens had his race-changing problems in turn two.

“I felt like I could start kind of closing in on him, but once you get so close, the air gets so bad,” Thornton said. “I feel like once before he hit the holes, as close as I got to him was as close as I was going to get unless I moved my line. He hit that hole wrong once and that was about all it took. He started bucking around.”

Thornton took advantage and led the rest of the way, surviving a pair of late restarts to complete the victory.

The race saw four cautions, all for single-car incidents or debris. Hudson O’Neal slowed with a flat left-rear on the 13th lap headed to the infield for new rubber. Hensley, who started 12th, was running fifth when he got into the fence in turns three and four and slowed for a lap-33 yellow flag.

The second-to-last caution appeared when fifth-running Brian Shirley ran into trouble in turn one with six laps remaining and a lap-47 caution flew for debris in turn four.